Our Annual General Meeting was incorporated into our St Patrick’s Day Party on Friday 18th March. Being a brief affair, our President, John Collins reported on the past financial year, during which activities were restricted due to Covid.

Office bearers were elected with John Collins returning as President and Gazi Ullah as Treasurer. Our committee has grown with most past members staying on and new members joining. Pictured are the committee members, who were able to come along on the night.

We also celebrated our 10 year anniversary! Norwest Community Association, formerly called Bella Vista Waters Community Association, held its first meeting in march 2012. The previous presidents were invited as guests of honour. Our founding President was Barry Batts. Derek Black became president in 2013 and John Collins in 2018. The Loyalty Card Programme as launched at the Community Festival in September 2012 and the first website launched in March 2013. The three presidents are pictured below. 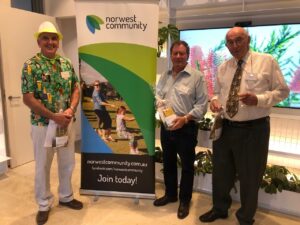